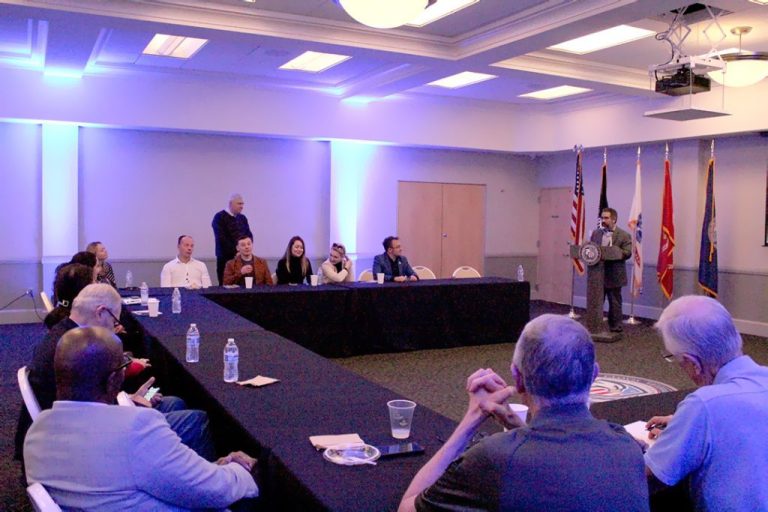 A delegation of Russian entrepreneurs met with staff of Congressman Jim Costa, Clovis Rotary members and local veterans to share information about culture and business from the other side of the globe.

The Dec. 12 meeting, which was held at the Clovis Veterans Memorial District and hosted by the Clovis Rotary, was organized by the Open World Leadership Center as part of its Open World exchange program.

The program is made up of a network of 29,000 alumni from post-soviet countries, including Russia, Ukraine, Azerbaijan, Georgia, Kazakhstan, Kyrgyzstan and Moldova. The center focuses on bringing about exchanges that establish professional relationships between American and post-soviet business leaders that showcase U.S. values and democratic institutions.

The delegation, which consisted of five entrepreneurs accompanied by a bi-cultural interpreter, were welcomed by CVMD CEO Lorenzo Rios, who explained the goals and purpose of the CVMD.

“The CVMD is here to honor veterans, because freedom isn’t free. Here we value that sacrifice,” Rios said, adding that the CVMD is a place where local veterans can organize and share their stories.

Rios introduced the delegates to veteran representatives from the American Legion and AMVETS.

The delegation arrived in Clovis Dec. 6 after touring the U.S. capitol. They spent their time touring institutions around the central valley, including visits to the U.S. Department of Commerce Fresno Export Center, Bitwise Industries and the Lyles Center for Innovation and Entrepreneurship.

Members of the Clovis Rotary hosted the delegates for the duration of their stay, which ended Dec. 14.

Clovis Rotary President Eddie Ocampo said the meeting was a rare opportunity for professionals from across the globe to engage, share business strategies and learn from each other.

“The intent of this trip was to engage with a community from another part of the world to build a better, global community,” Ocampo said. “After the course of a week of me engaging with this wonderful group of young people, I can assure you that we have much to be hopeful for.”

The delegates showcased a presentation on Russian business practices and discussed their experiences touring the United States, which marked their first trip to America. The atmosphere was light-hearted as the delegates joked about how “Americans are much better than what is shown on television.”

Olga Sergeyeyena Kayeva, one of the delegates, said her time in the U.S. showed her how business could build up communities.

“What I really liked about what I saw here was that in your country, you unite and work together with all sort of organizations and business, you have one big goals: to make your community better,” she said. “This is wonderful to observe and I wish to head in that direction when I go back to Russia.”