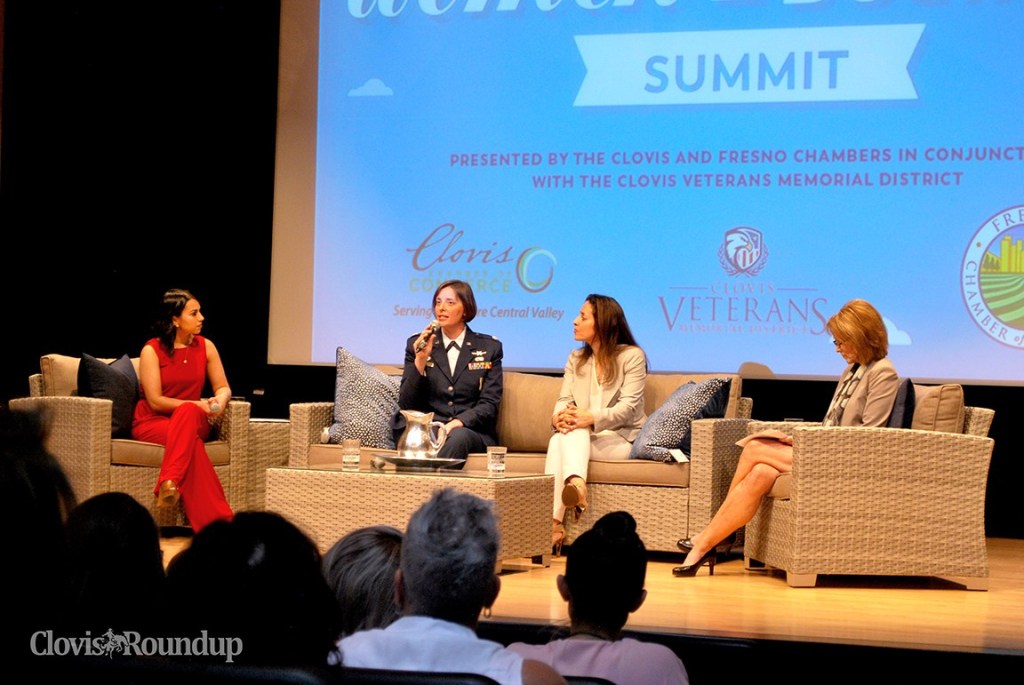 Women community and leaders from the Fresno and Clovis area met for an evening of empowerment, inspiration and networking at the 2nd Annual Chamber Women in Business Summit on June 27.

The conference, which took place at the Clovis Veterans Memorial District, featured a panel of speakers followed by a business trade show.

The panelists expressed their appreciation for those who came to learn from and support each other at the start of the discussion.

“I love the support from the community and the gathering of each other so that we can encourage one another in our pursuits and our goals and our leadership and all that we have to offer with our talents and our gifts to the entire world,” Corliss told the audience.

Ramirez asked the panelists questions about their life experiences both in their professions and in their personal lives. The panelists offered insight regarding their success in their fields, the obstacles they have faced and their advice to other women in the professional world.

“Initially, I was very fortunate to have amazing work experiences at such a young age,” Alfieris said. “I was moving up very quickly at a very young age, and I think my biggest challenge with that was that I was young, and it’s hard to get people to take you seriously when you’re young in management positions.”

The panelists also discussed individuals from whom they draw inspiration and the importance of having strong figures to look to for guidance and encouragement.

De Young noted the role Fresno realtor Helen Smades played in inspiring her both as a businesswoman and as a person.

“When [Smades] was young, she lost her husband. They had four young daughters at the time,” De Young said. “To support her family, she entered the real estate industry. And she persevered to have a successful career, which she still does to this day at age 90 years young.”

After the hour-long panel discussion, the conference’s 300 attendees left the auditorium and entered the Memorial District’s Liberty Ballroom, where various businesses and institutions had booths set up to share information about their organizations.

Businesses such as Jersey Mike’s and Toledo’s Mexican restaurant and others offered samples of their food for attendees to taste while they mingled and networked throughout the conference.

Free beverages, both alcoholic and not, were available for those in attendance to sample while they browsed the trade show floor.

The conference was a collaboration between the Clovis and Fresno Chambers of Commerce with many private sponsors, including the event’s presenting sponsor Hatmaker Law Group, said Diana Hunnicutt, membership director of the Clovis Chamber of Commerce.

“The response has been just really wonderful,” Hunnicutt said. “We were very fortunate to have a good community support, both Fresno and Clovis, which is wonderful bringing two communities together.”

This is the first year the conference was hosted in Clovis. Following the event, the chambers will evaluate the attendees feedback and begin planning for next year’s conference.

“That is something that we are planning on meeting about to talk about afterward, how we can improve it,” said Priscilla Montell, administrative manager of the Clovis Chamber of Commerce. “We really just are taking in the fact that our community really, really wanted this. And we hope that it can even grow larger next year.”